Living in a non-Muslim country, the way of life in Bahrain may appear too different and too distinct. This is a given—as in any other culture—as this island country has traditionally long been an Islamic nation, earliest among the varying regions in the Middle East to convert to the faith of Islam.

This is probably pretty much a concern if you are known and used to a liberated life in the West where pretty much anything—to a certain extent—is tolerable according to existing laws and norm. 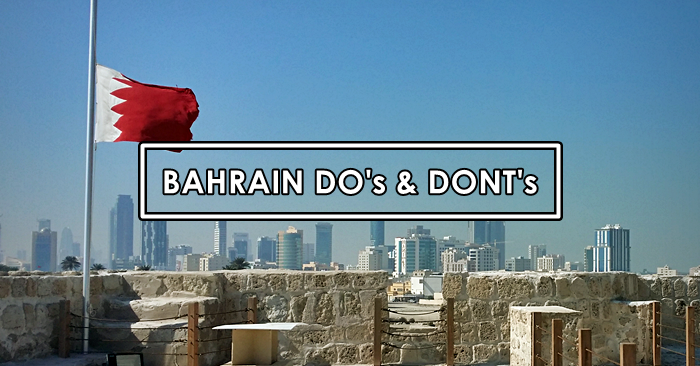 How to Behave as an Expat in Bahrain

But whether or not you are a liberal yourself and is considering of visiting the Middle East, specifically Bahrain, know that as a country of Muslims, this tiny nation is very conservative as is true to its neighboring nations bearing the same faith.

While one culture in the Middle East may be more or less strict with regards to its customs, Muslim nations which have good relationships with the countries in the West are generally more lenient and open-minded towards the striking difference between unique cultures.

Bahrain can be one such nation.

However, all these Muslim nations have one thing in common: They are all very conservative and going against its laid-out beliefs may pose serious consequence to those who deliberately violate them.

Yet, as Bahrain can be itself distinct from its neighbors, it, too, has its dos and don’ts—gender-specific or otherwise—that it expects people will follow if are within its own realm.

Dos and Don’ts for Men

Generally, there is no mandate about what a man can wear in Bahrain apart from the idea that it has to be neat and clean. Many Bahrainis commonly appear smart-dressed sometimes for this reason.

If you are to visit a mosque—Muslim’s place of worship—things get stricter even by native standards out of respect towards the faith. This means in clothing—apart from being presentable—no one is allowed to wear sleeveless tops and/or shorts inside a mosque. While you can wear shoes prior to entering the sacred place, it must be first removed before entry.

Although not bearing the same repercussions as generally placed on all mosques, malls and restaurants mandate their customers of being presentable which means wearing messy clothing or shorts is a big no.

The only where males are ever allowed to wear shorts at anywhere in Bahrain is in the one’s own abode or in the beach. But the latter, too, has its own restriction: Speedos are not allowed.

Dos and Don’ts for Women

The faith of Islam can be very strict with regards to clothing in women which concerns the length of the tops and skirts that must be worn in public.

If not wearing pants, the skirt must be at least below knee in cut. As for tops, all body must be covered—definitely no showing of cleavages and the abs—with allowance of short-sleeved dresses.

When going to mosques, most parts of the body must be covered which includes the hair, arms, and legs, possibly with a loose clothing. No shoes are also allowed for women within the place of worship.

Restaurants are a liberating place for women in Bahrain as this is the only place where they are allowed to wear somewhat revealing clothing such as that which shows the cleavage or equally less conservative clothing.

Private beaches, too, offer significant freedom to women in the small country as anything—apart from going nude—is allowed to be worn in the place.

The level of strictness in any household which hosts women is completely dependent upon the family itself. Generally, most Bahrainis are rather lenient to what the females in the household could wear so long as it is decent.