Philippine cuisine has been gaining international recognition recently. Around the world, more and more people are trying out authentic Filipino dishes, which include a wide variety of snacks that we Pinoys usually call “merienda.”

The term merienda basically translates to “a light meal” in Spanish. In Spain and Latin American countries such as Mexico and Brazil, merienda typically refers to a light afternoon snack. Here in the Philippines, however, the term is used to describe any meal or snack outside breakfast, lunch, or dinner. Yes, Filipinos love to eat… a lot! Top Filipino Snacks of All Time

Most Filipinos usually have merienda at around 9:00 or 10:00 o’clock in the morning, and again between 3:00 to 5:00 o’clock in the afternoon, then sometimes even at 11:00 pm to 12:00 am (midnight snack). You heard that right! Filipinos are the ultimate foodies, and we love to eat five or more times in a single day!

What do Pinoys like to eat for merienda? Well, it can be anything, really — a sweet or savory snack, something hot or cold, a quick bite, or even a filling dish that’s almost like a main meal. Here is a list of some of the most popular Filipino snacks for merienda of all time:

This is a sweet snack made of bilo-bilo (glutinous or sticky rice balls) cooked in coconut milk, along with tapioca pearls, sliced bananas, jackfruit, purple yam, and sweet potatoes. Some people call it “ginataan” or “ginataang halo-halo,” mainly because it is stewed in “gata” (coconut milk). Bilo-bilo is typically served in soup bowls, and may be enjoyed as a warm dish or as a chilled treat!

Binatog refers to white corn kernels that are steamed, lightly salted, and then mixed with shredded coconut. It is usually sold by street vendors with mobile food stalls roaming across a town or a city. Interestingly, in some parts of the Philippines — a few towns in Laguna province, for example — binatog is known as “kinabog.” Cool names, right?!

Speaking of coconut, this next dish is made with bits of coconut, along with tapioca pearls, jelly cubes, and other fruits — all mixed in sweet condensed and evaporated milk. It is usually served as a dessert, and is best eaten cold! Champorado is a type of porridge made by boiling glutinous (or sticky) rice with cocoa powder. It is typically served for breakfast, but it may be enjoyed as a snack, too! Upon serving, champorado is sometimes topped with powdered milk or fresh milk. Some people even like to put bits of tuyo (dried fish) on top to add a salty taste! As an alternative, you can also add some bits of bacon to your champorado. Yum yum!

Notably, champorado is derived from the Spanish drink “champurrado,” which is hot chocolate thickened with cornstarch. Early Filipinos decided to add rice instead of cornstarch, resulting in the sweet, chocolate-y dish that we know today!

It goes without saying that chicharon (pork cracklings) is among the Filipinos’ favourite snack. It’s crunchy, it’s salty, and oh so delicious, especially when dipped in spicy vinegar! Chicharon is often served as “pulutan” — a dish that is paired with beer and other alcoholic drinks.

Chicharon is usually made of pork skin and pork rinds. However, there are different variations as well: chicharon bituka (made from pork intestines); buchiron (made from chicken esophagus); “fish-charon,” and “mushroom-charon,” among others.

Empanada is another dish that is inspired by Spanish cuisine. It is basically dough filled with meat and vegetables, then fried or baked before serving. Empanada comes in different varieties across Philippine provinces. Among the most popular is the Ilocos empanada, which includes longganisa (local garlic sausage), cabbage, unripe papaya, and egg — all wrapped in dough, deep-fried, and served with Ilocos vinegar. Yum!!! Not to be confused with “empanada,” ensaymada is a type of pastry that is also inspired by Spanish cuisine. It refers to soft bread rolls that are topped with butter and then sprinkled with sugar… lots of it! Ensaymada is best enjoyed with a cup of hot coffee or hot chocolate. Delicious and very filling, indeed!

In most countries, mango is usually eaten once it’s ripe and yellow. Here in the Philippines, however, there are some mango varieties that are usually eaten while they’re still green. Green mango is typically paired with bagoong (shrimp paste). The resulting taste is a delicious mix of sourness and saltiness that many Pinoys love! 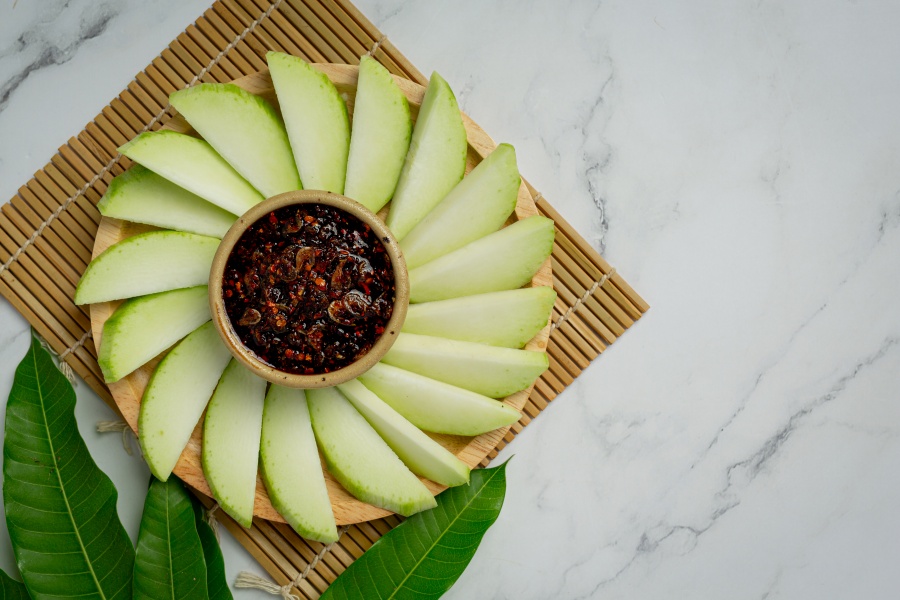 The term halo-halo literally means “mix-mix” in English. As the name implies, it refers to a dessert that is made of “a little bit of everything.” How do you make halo-halo? You start by putting bits of purple yam, sweet beans, coconut jelly, leche flan, jackfruit, and other ingredients in the bottom of a tall glass. Top it with shaved ice, some milk, and even some ice cream… then simply mix everything together. Enjoy!

Lugaw is basically rice porridge that is best served hot — topped with chicken bits, beef tripe, lots of fried garlic, pepper, and calamansi (local lime). You can also add a hard-boiled egg to make it more “special.” Lugaw may be eaten for breakfast, as an afternoon merienda, or even as a midnight snack! It is filling, easy to make, and affordable, too! 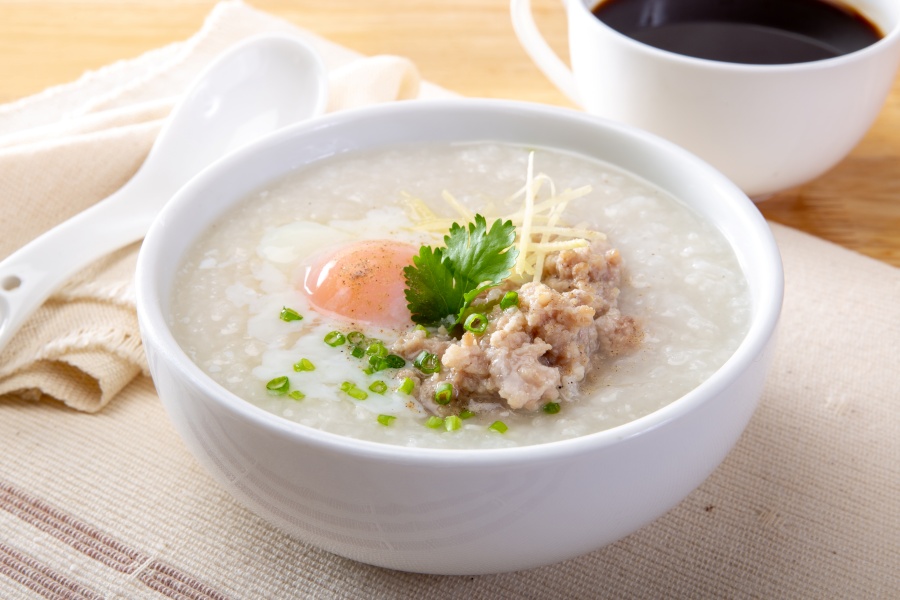 An influence of Chinese cuisine, lumpia refers to deep-fried egg rolls or spring rolls. There are different varieties: “lumpiang shanghai” is made with ground pork or ground beef, with onions, carrots, and other seasonings. Meanwhile, “lumpiang togue” contains togue (mung bean sprouts) as the main ingredient, mixed with carrots and onions, too. Maja blanca is typically served for dessert, but it may also be enjoyed as a snack in itself. It is made from coconut milk, cooked until thick (like a pudding) and topped with yellow corn kernels and grated cheese. What a sweet treat, indeed!

Without a doubt, pancit is inspired by Chinese cuisine. There are different varieties, based on the type (and thickness) of noodles that you prefer: pancit bihon, pancit canton, and pancit sotanghon, to name a few. The noodles are stir fried with lots of chicken, meat, shrimp, and vegetable bits. It is best served hot, and topped with calamansi. Delicious! Pancit palabok is a type of noodle snack, made with rice noodles topped with a thick, savory sauce and bits of chicharon, tinapa (smoked fish), and hard-boiled eggs, too! It is usually served in a bilao (native round tray) and enjoyed during parties. Yay!

Pares refers to a dish made of beef, which is  stewed in soy sauce, star anise, and other spices. It is usually served with garlic rice, thus making it a “main meal.” But we can also enjoy it as merienda or midnight snack, right? Right?! Beef pares is typically served by street vendors and carinderias.

Puto is a type of sweet flour cake that is steamed and topped with cheese (and sometimes salted egg). Meanwhile, kuchinta is a tapioca flour cake that is usually served with grated coconut. Both puto and kuchinta are what we Filipinos call “kakanin,” or cakes that are made with rice, coconut, and other native ingredients. Speaking of rice cake, another must-try is puto bumbong: purple-coloured rice cake that is steamed in bamboo tubes and topped with margarine, grated coconut, and sugar. Puto bumbong is usually available during Christmas time, as a snack sold by vendors right after “simbang gabi” (night mass). Suman is another type of “kakanin” (rice cake) that is made by steaming glutinous rice wrapped in banana leaves. Again, there are different varieties across the Philippines. Some wrap plain suman in palm leaves, while others add flavours like crunchy shredded coconut, jackfruit slices, and other ingredients.

Spaghetti is mainly known as an Italian dish, but did you know that the Filipinos have their own version? Filipino spaghetti contains ground pork or beef, along with lots of hotdogs! But perhaps the main distinction is the sauce — sweet (but not too much), savory, usually made with tomato sauce and banana catsup. Very delicious, indeed!

As you can see, there is a wide variety of snacks that Filipinos enjoy. It can be a light merienda or a filling meal, enjoyed during mid-morning, mid-afternoon or even close to midnight! The fact is, Pinoys are the ultimate foodies, and they enjoy eating — and sharing — their merienda!