Another good news! Philippines President Duterte has recently signed a bill which provides FREE EDUCATION in over 112 state universities in the country. Only a couple of days after Duterte signed another bill extending passport validity from 5 to 10 years, this is definitely something a lot of Filipinos in the Philippines and abroad are really happy about.

In a news release by the Presidential Communications Operations Office, President Duterte has signed the “Universal Access to Quality Tertiary Education” which provides educational support to poor students to study in state universities in the Philippines. 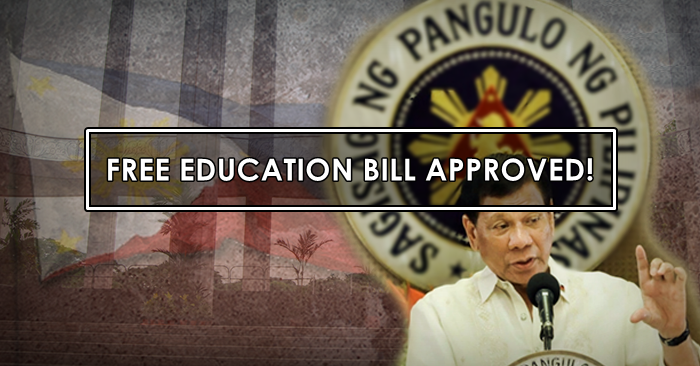 After a meeting with economic advisers and lawmakers, President Duterte signed the bill which allows students with universal access to quality university education and free enrollment in all state universities in the Philippines.

Republic Act 10931 or “Universal Access to Quality Tertiary Education Act,” which Congress ratified in May and was transmitted to the Office of the President on July 5, gives full tuition subsidy for students in State Universities and Colleges (SUCs), local universities and colleges, and state-run technical-vocational schools.

Even if there have been warnings of insufficient government funds to cover the tuition fees of hundred thousand students enrolling each year in universities, President Duterte has remained steadfast mentioning that the long-term benefits having a well-developed tertiary education still outweighs short-term challenges in budget.

A lot of Filipinos who had to travel abroad are looking forward to this simply because this is one of the reasons why we’ve become OFWs in the first place. The desire to provide a better life for our families and a good education to our children is one of the driving factors why we still continue to work overseas, even if it means being away from our loved ones.

Once this law is implemented by the state colleges and universities, this will give OFWs some space in having allocating budgets and costs. The free tuition in the Philippines will surely help a lot of us.